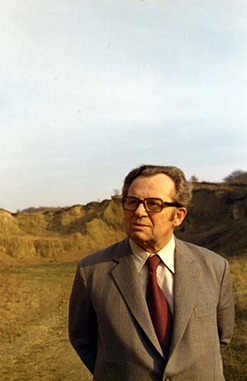 The founder of the company, Otto Klaus, began the pigeon breeding at the age of 10 years. By careful observation, he found that the pigeons, apart from food and water, showed a particular preference for mineral substances, small stones, and others.

The demand for these substances increased during the breeding of young animals. Since it was hardly possible to buy such substances which were suitable for feeding at that time, Otto Klaus began to bake so-called pigeonstones for his pigeons, for instance, in 1926, after having practiced with racing pigeons for many years.

They consisted of a mixture of clay, earth, sand, pebbles and some salt. At the beginning these “pigeonstones“ were produced only for the own demands and good companions. The pigeons proved particularly important for racing pigeons, since they prevented the animals from absorbing harmful substances such as fertilizers and other potentially poisoning substances in the fields.

By feeding these stones the pigeons and their organism were offered insufficient minerals and grindstones without endangering the pigeons. In the course of the next few years, Otto Klaus experimented with a wide variety of materials. Since he lived near the Doberg-Mountain, whose marl was used for fertilizing the fields for a long time, he observed wild birds on the mines’ pits up taking the marl as a feed. He began to use the fossil-rich mineral rock experimentally and produced the first Klaus pigeonstone. Surely this was a significant step in the life of Otto Klaus.

He also made an important discovery for pigeon sports. The fossil- and mineral-rich sediments of the Doberg marl were taken up by the pigeons with particular preference.

Subsequent investigations and expert reports from scientists and researchers testify that this is not only a very mineral-containing substance with trace elements, but that this material of calcareous plants and marine animals, which is millions of years old, is in a very porous, loose form, from which the Pigeons can absorb the important minerals particularly well.

Between 1928 and 1932 the sale of the Klaus pigeonstone started, because of the demand by pigeon fanciers it became ever more intense. During this time, Otto Klaus had close contact to the well-known Belgian breeder Dr. Bricoux, who was regarded as the “world champion” in pigeon-breeding, who did not sell pigeons back in these times. Yet the first specimens of the famous Bricoux pigeons came to Bünde, in exchange for a very smart German Shepherd, from whom Otto Klaus separated heavy hearted. Otto Klaus succeeded in introducing the valuable Bricoux pigeons to Germany.

This was the beginning of a successful pigeon breeder who raced amazing successes. Numerous awards, medals and periodicals testify to this. The interest in the breed also increased the knowledge of Otto Klaus about the healthy keeping and the habits of the pigeons.

In the second world war the production and sale of the stones rested. 1947 it continued again, this time directly in the Doberg, in a rebuild limekiln and in a specially designed, small building. The Klaus-Taubenstein was constantly improved by other ingredients. In 1951, the stone was named “Gritstone” for the first time. In 1954, the production building had to be demolished after the Doberg had been declared a landscape protection area. In the following years until 1959, a rebuild sheep farm was used as a production facility for the now widely used “Klaus Nähr-Gritsteine”. The sales program of the company Klaus expanded and beside the stones were offered Pico-Grit (mussel shells) and troughs made of glass.

At the end of the 1950s, production had reached a volume that urgently required the creation of new premises. In 1959, the first large factory building at Buchenstraße 7 was completed, today’s company headquarters. In 1962 further new products were offered, e.g. Nutrient shells, vitamins and the parasite ex. In 1964 the construction of the large marl-floor for the dry storage and treatment of the Doberg marl followed. This was necessary because the processing of the marl in humid seasons involved considerable disadvantages. The expansion of the production range was so rapid that another large building had to be built in 1970.

The positive popularity of the Klaus Gritstone ​​and its meaningful composition have been confirmed in the past years by feeding attempts.

Thanks to the long-sightedness of Otto Klaus, the various possibilities for the dispatch of goods were used and an almost uninterrupted sales network was built up all over Germany. The number of employees, which today is around 25 employees, also rose with the growth in sales. Due to the large number of customers, administrative work was so extensive that the first IT system was put into operation in 1978, at that time one of the most advanced systems of data technology. However, the rapid development in data processing now opens up a much wider field of application than at that time. Today, electronic processing is also used for product development, production and administration.

In 1976 the company was handed over to the sons Rolf and Peter Klaus. In 1979 Otto Klaus died after years of serious illness. In 1980 the company “Siegertaubenlabor” was taken over. Since 1983, a separate scientific department has been responsible for the research and development of feed. At the same time, a new line of business was established, the development and manufacture of high-performance vehicle engines. Another important event in the development of the company’s history is the granting of the manufacturing permit for medicinal products in 1987. Thus the company Klaus Mischfutter- und Arzneimittelherstellungsbetrieb arose.

In 1990 the space requirements of the company had increased to such an extent that the spin-off of the department for the construction of sports and racing engines became necessary.

In 1991, however, the site had to be extended in order to be adapted to modern transport logistics.